The talk “The Indie Game Developer Survival Guide” is part of the Mobile and Smartphone Games Summit of GDC China.

The talk goes over the current mobile gaming landscape, the different business models, how they worked for us, lessons learned and tips so you can increase your chances of survival as an Indie Game Developer.

GDC is a great conference for game developers, be it USA, Europe or China, and I am really humbled that they invited me to speak there.

However, China is very far away, but for the ones in the Netherlands, I will be presenting a slightly different talk at DroidConNL this year: “The Mobile Indie Developer Survival Guide” which includes some more details about how apps do.

The slides will be available on Slideshare soon after the conference.

I stated many times (like in this slides) that between being featured or not on Android Market (now Google Play) means to Fly or Die.

Previously, there were 2 levels of featured; each week new titles ware added and the oldest ones ware shifted out. First you were into the top list -appearing on the header- and into the featured list, that was sorted at random. After the first week you were pushed out of the top, and after one month you were pushed out also from the featured list. It looked like this when Chalk Ball was featured past year: 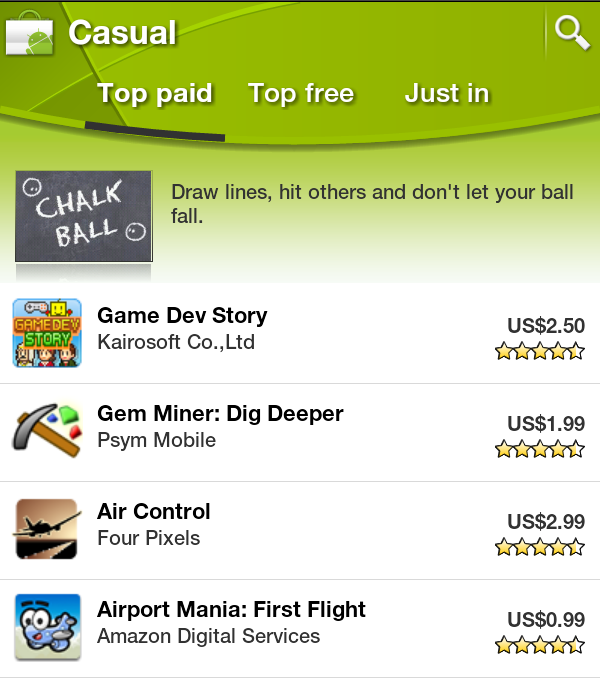 This changed with the update of Android Market that presents the apps as “tiles”. Now there is a main screen, then another one for most of the categories and, in the case of games, there is another one for the genre. After that you still can browse the normal lists. It looks like this now that SpaceCat is featured: 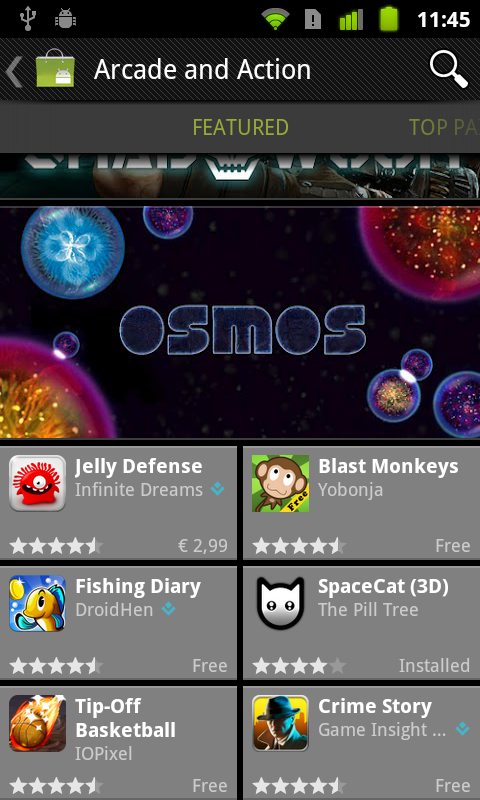 While I believe that Android Market has too many screens and lists to the point that is confusing to the users and many of these screens are too many clicks and swipes away that they are barely reached, that is not the topic of this post.

Today I want to talk about the stages in being featured inherent to this hierarchical structure. It goes from more to less. I have classified them according to Dragon Ball Saiyan states, to emphasize the power gap.

When new featured titles appear, they are usually put on the big banner of the web and also the main screen of the app. This is the first screen users see when they open the market and -I suspect- it has a huge impact.

Needless to say, when you are featured on the home page, you are also featured in the category and subcategories and you appear in the Staff Picks list.

Unfortunately I can’t give you figures about this because SpaceCat was featured directly under Games, but feel free to extrapolate the results from the other cases.

This is the screen when users go to find something specific. Fortunately for us Games has an entry from the homepage and it is one of the most visited screens of all the market. SpaceCat was placed there for around 2 weeks, sometimes as a big banner, sometimes as a small one.

Being there we averaged 50k downloads per day. Mind you, SpaceCat is a Free to Play game, a paid app will have a lot less downloads -as we experienced with Chalk Ball-. Still, 50K downloads a day is totally massive. To put it in context SpaceCat had 50K downloads in total from the previous 6 months, including more than 10 blogs reviews, so yes: WOW.

Of course, during this time you are also listed on the subcategory and in the Staff Picks, which just adds to the number of downloads.

Once you had your time here, it is time for some fresh meat, so you will logically be pushed to be only in your subcategory and the staff picks list.

During this period we averaged 15k downloads a day. That is half what we got per day when Rabbit and Eggs (an Easter themed free game) was featured on the Main Page during Easter 2011.

The number of Android devices out there has grown a lot over the past year. With the figures of past Easter and now I can say that the number of potential users definitely has grown in the same proportion.

Then, after the standard month period, your app will be removed from the Staff Picks list, but will remain on the subcategory for a while longer. Thankfully there are more spots now on Android Market and you are not pushed completely out at that moment.

This was a bit surprising bit for me. When the app was pushed out of the Staff Picks, but still on the subcategory, we observed a drop to “just” 5k daily installs. I was expecting the importance of Staff Picks and subcategory to be the opposite.

Although that is just 10% of what we got on the first stage, it means a lot of downloads and as an indie developer I appreciate this slow decrease in popularity and downloads instead of the sharp drop we experienced a year ago with Chalk Ball.

Although 5k downloads a day sounds small when you come from being on the top, it is still a very good amount of downloads you are very unlikely to get from any other place.

Note: Platty Soft is the current company responsible for the games of The Pill Tree.

On March 24th, I will be giving a guru session at Mediamatic Bank (Amsterdam) about tools to build games for Android. This session is organized partly by Appsterdam and partly by the Dutch Android User Group, that’s why we have half of the seats on the Appsterdam meetup page and the other half in the DutchAUG page

There are a few spots left, and I believe it is going to be an interesting one, so go and get one!

I will publish the slides on this blog once the session is done.

When thinking about building a game for Android, one can write it from scratch. Or you can look for tools, libraries and engines that already exist so you don’t have to reinvent the wheel.

We did that at The Pill Tree for both Chalk Ball and Space Cat, both games have different requirements and the solutions we found were also different. In this session I will summarize the strong and weak points of AndEngine and jPCT-AE and the uses you can make of them.
I will also give a brief explanation of other libraries that are interesting, such as ScoreLoop / OpenFeint for scores and awards and give a short introduction to virtual currency and incentivated ads.
After the talk, I will provide the people with the samples of both engines and we will play around with them.

It is true, piracy exists. As a matter of fact, when we launched Chalk Ball at The Pill Tree, it got cracked in a couple of weeks. We were checking for blog reviews at a time and we found it, so it was even easy to find.

Cracking an Android app is not very complicated, but it is not trivial either. If someone takes the effort to do it, it means you are already in the way to succeed. Having your apps cracked is something to be proud of. So if it happens to you, don’t get angry, be proud of your work.

The cracked version was almost complete, just facebook integration was broken. There you have a tip: Since the signature can not be recreated, If you want your app to be really hard to crack, use facebook single sign in to login into your app.

Now think about the effort the user has to make to install an app from somewhere that is not Android Market.

First you have to seek and check an option labeled “Unknown Sources”. Many users will not do that, simply because is scary, and it is true, you are installing apps from untrusted sources anyway, if they cracked a game they can put a trojan inside it as well, right? 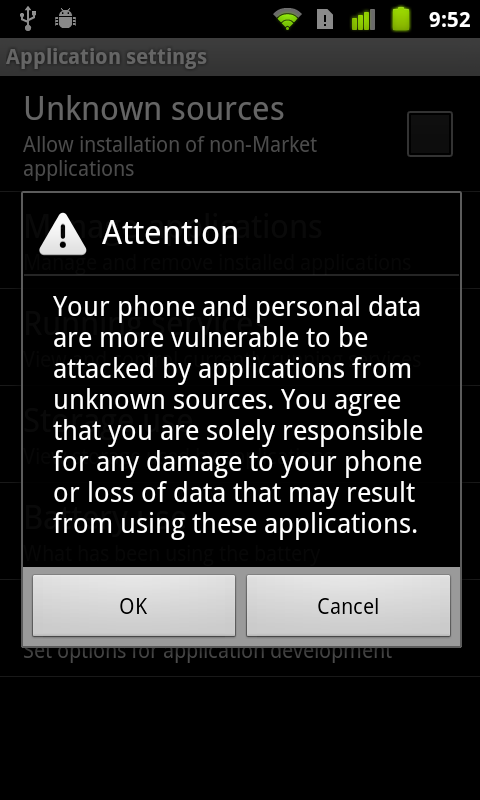 Secondly, downloading it and installing from your Android device is usually not trivial, you may need to download it in your computer, copy it to the sdcard, and then open a file browser to install it. Not complicated, but long and boring.

It is all about the cost of opportunity. If someone is about to install an application from an unknown distributor on the internet -having a free version that is enough for a few hours of play- and the process is going to take you more time than using the official channel, to save scarcely 2$, then is not a lost sale. This person was not going to buy it anyway.

Given that the problem with mobile games is mainly the visibility, each install -even if it is from a piracy source- is going to help you. That person is going to show the app to other people, and since there was an extra effort required, he is more likely to show it than those who just downloaded the free version. In the end, it is some sort of advertising.

These are my reasons to state that it is not a lost sale, and also that it is some sort of advertising. However, you may not be convinced by my arguments, then I’ll tell you about the ultimate tool to battle piracy on Android. Ready?

It is called the GetJar Gold program. They give paid applications for free, and you know what? They pay you per download. Sounds crazy, I know, but it works. They are a well known source and they have the latest updates since they work with the developers.

Once your app is part of GetJar Gold, piracy is meaningless. You just need to install their App Store and from there on, you just download the gold apps for free, almost as easily as from Android Market.

Using GetJar has a higher opportunity cost for a user than using the market, but less than downloading an apk from the Internet. So still, many people will get your app from Android Market. You are offering the people that is up to make an extra effort to get the app for free a legal alternative to piracy.