Paid apps always had a better ratio of users leaving feedback than free ones, but in the case of MTG Tracker it was too much.

MTG Tracker used to have a very good ratio of users that leave comments. This was reduced when Google Play required G+ sign in to leave a comment, and that was specially bad for the free version, which was released after that change was made.

Both had good average rating, but while almost a 6% of the users leave a rating on the paid version, for the free one that number it is under 0.6%. Yes, 10 times less.

So, I decided to add a “Rate Us” dialog to improve that, knowing that the users of the app use it a lot and just may never thought of rating it. 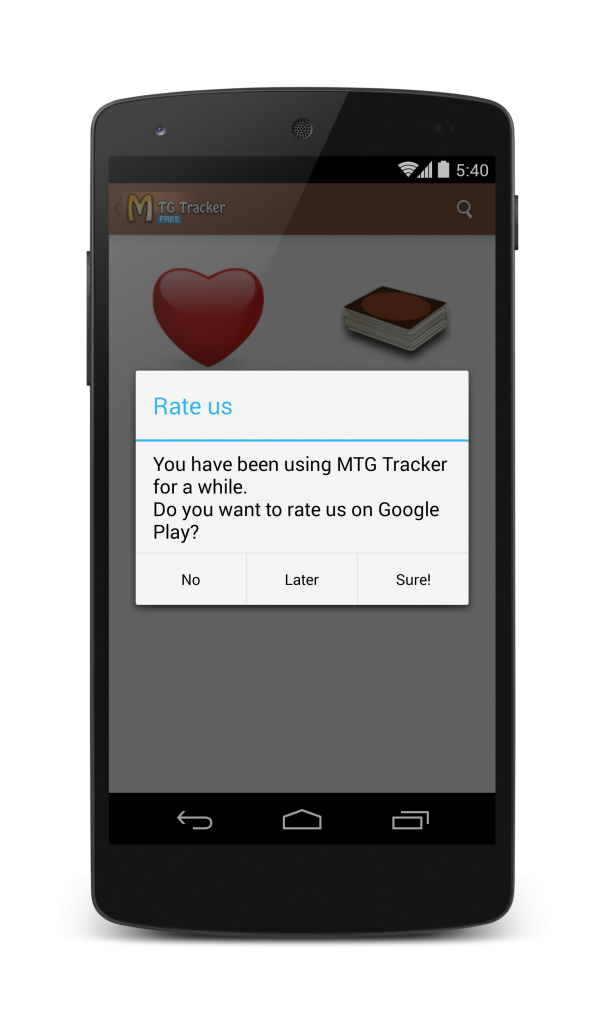 I did not add it before because for a while I only had the paid app, which has a good amount of reviews. After one week, I went to check the results of the dialog. The stats looked like this:

Please note that the free version has much more installs per day.

I decided to let a few more days pass and checked again.

As it turns out, the percentage of users leaving a rating on the paid app is almost the same as before the dialog was introduced, but the ratio of reviews for the free version has grown up to 0.7%, may not seem much, but the free app has 30% more ratings than before.

After this experiment, it is very clear to me that you must always add a “Rate Us” dialog, even if your current amount of ratings is good. Most users are lazy and will not rate your app unless you ask them to do it.